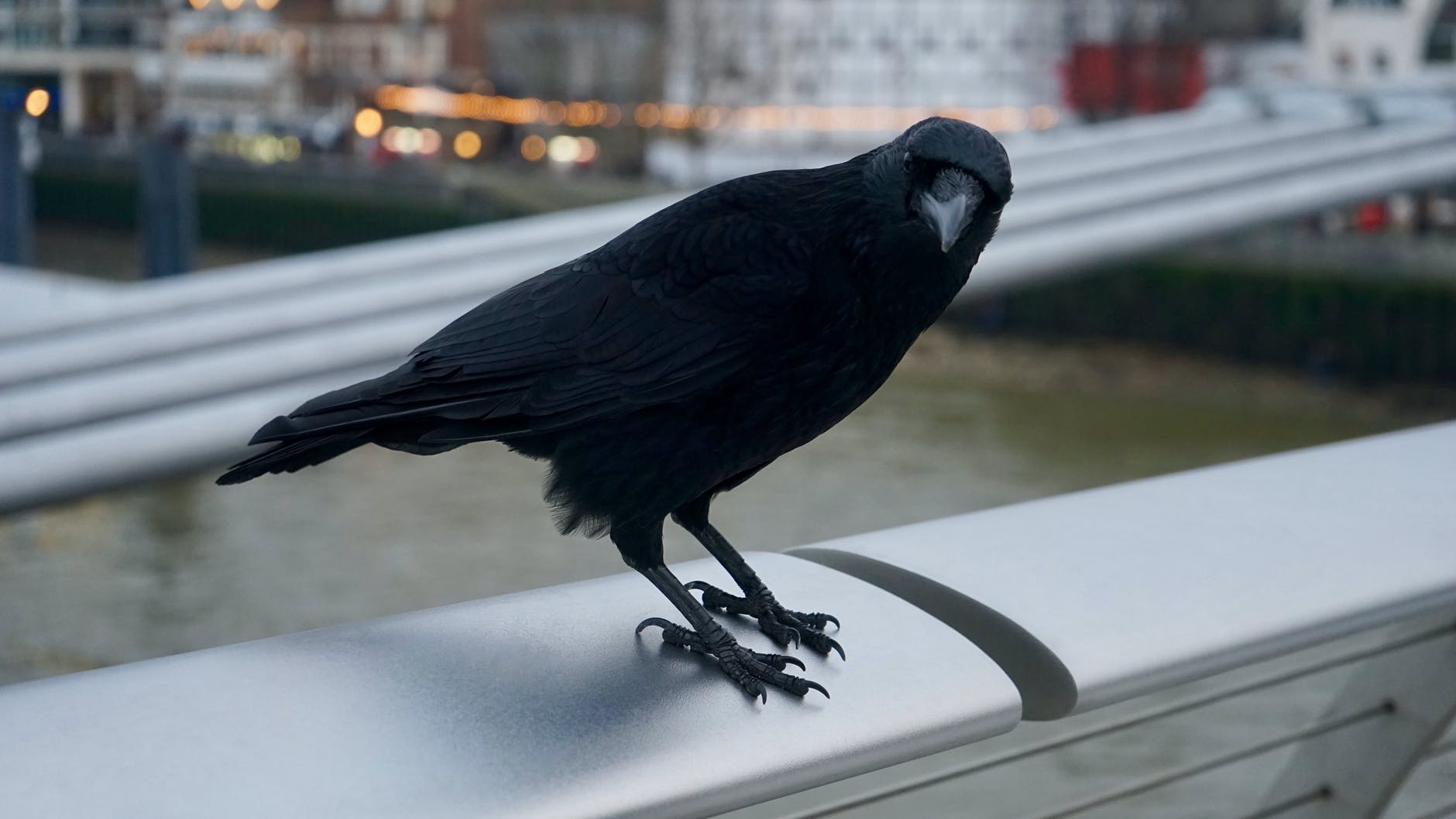 As preface to all my weird stories, I feel obligated to let people know that I was raised on “Fractured Fairy Tales” and “Twilight Zone” and “Outer Limits”…then later “Night Gallery” held me in thrall. So I feel it only natural that my imagination heads into the weird and slightly horrific.

This story “The Tattoo” is also one from the old Fantastic Femme Fiction group of weird stories. I liked writing this one, and it still flutters around in my head from time to time, so I thought I’d share it here. It brings to mind “spirit animals” and “animal totems” and all the energy that is focused on them. Anyway, I hope you enjoy this little diversion.

Alice woke up one fine morning with a tattoo on her stomach. This would have been unremarkable except that when she went to bed the previous night, she had been tattoo free. And she was not prone to sleep walking nor was she anywhere near a tattoo parlor. What’s more, the tattoo looked remarkably like a crow – which, if she had chosen a tattoo at all, it would not have been a bird of any kind. Birds made her nervous.

She had not felt any discomfort on waking, and she had only noticed the tattoo when she took off her nightgown and was stepping into the shower. She thought at first that her eyes were playing tricks on her.  She stepped out of the shower again, dripping wet and stared at herself in the mirror.

She dressed, had coffee, and went to work. At break time, she called her doctor’s office to make an appointment. By the afternoon, a miracle occurred and her Doctor’s office called to say they’d had a cancellation and she could come in at 4 pm that very day. She, of course, said yes!

Alice cleared it with her boss, and arrived at the Doctor’s office a few minutes early. She noticed that there was one other person in the waiting room with her, and otherwise the office was blissfully empty.

Her stomach fluttered and she put it down to nerves, she was always nervous at the Doctor’s office. Alice couldn’t help but watch the other patient waiting with her in the room. The woman sat hunched and had a slight bulge in her middle that seemed to move sometimes.

Alice thought the woman might be pregnant, but she’d never seen that sharp a movement on the torso of a pregnant woman before. She was curious, but otherwise more concerned with how she got a tattoo and how she was going to get rid of it.

The receptionist finally called her name, and she was ushered by a woman in blue teddy bear patterned scrubs to a little room with a chair and an exam table. “The Doctor will be right with you. If you will just remove your clothing and put on the exam gown…we’ll knock before coming in.”

As Alice disrobed and reached for the exam gown, she looked down at her stomach, and the outline of the crow had changed. There was more detail now, and more color. And she had the disquieting feeling that the eye of the bird was actually watching her, and aware.

There was a knock on the door, and Alice answered “I’m ready!” and the Doctor and his assistant came into the exam room. The Doctor, clip board in hand and stethoscope around his neck – greeted her and asked what brought her here this fine day.

Alice explained that she had discovered a tattoo of a crow on her stomach when she had her morning shower.  She expected disbelief, and perhaps questions regarding her mental health and sobriety, as the Doctor and his teddy bear clad assistant exchanged looks.

Instead, the Doctor simply said “May we have a look?” And Alice obliged them both by opening the exam gown and showing them the crow.

“Has it changed since this morning?” The Doctor asked, handing the clip board to the woman, who began to make notes.

Their serious demeanor and lack of disbelief was more frightening to her than if she had had to defend her story. She answered somberly, “Yes, it was an outline this morning, and now it seems to be filling in with color and detail.”

The Doctor examined the bird closely. Then, warming the stethoscope in his hands he listened to Alice’s heart first, and then lower to where the bird’s heart would be, if it were a real bird. He nodded, and to his assistant he said “looks like about 12 more hours.”

“You are the fourth patient we’ve seen with this – whatever it is – and based on our experiences with the previous three, and based on the level of detail of your, um, okay we’ll call it a tattoo – it should become a fully realized crow and separate from you in about 12 hours.”

“What the hell?” Alice nearly screamed, “How did this thing get here? Why? And what am I supposed to do with crow, once it separates?”

“We don’t know how or why. We only know that it is happening worldwide to about point two percent of the population. We don’t know what you all might have in common. And not everyone has the same tattoo. There have been reports of Owls, Bats, Coyotes, a Wolf and a Bear.”

“A bear? My God…” Alice was speechless.

“The good news is,” the Doctor continued “you should be fine after the separation. You should just leave a window open, and not wear anything tight for the next 12 hours. If you need a note for work, I’ll be glad to write one for you so you can take tomorrow off – you’ll be tired after the, uh, separation.”

“Wait..why do I have to go through that, can’t you operate or something?” Alice was not happy to think she’d have a bird coming to life on her body that then separates and flies around her apartment.

“The first case of this, the doctors tried to remove the tattoo with a laser. The patient died and the tattoo transferred itself onto the doctor. In another case, a skin graft was attempted – same result. Until we understand what exactly is happening, we suggest that you just – well, go with it.”

Alice got dressed, took the Doctor’s note, called in sick for the next day and went home to her apartment to await “the separation”. The fluttering was unnerving and she was starting to be mesmerized by watching the details as they appeared on her stomach, in the mirror of her bathroom.

As the hours ticked by, rather than being frightened, Alice found herself becoming calmer. Even the movement that she could feel was getting stronger in the figure, no longer upset her. She could see it becoming more and more solid and three dimensional. She caressed the deep blue-black feathers with tenderness.

And when she felt it was time, she walked slowly into her living room and opened the window. Her emotions were flooded with something like anticipation mixed with sadness. And she finally felt the slow tearing away of the now complete crow, it was like removing a particularly large and sticky band-aid…and then it was free of her.

It stood on the windowsill and regarded her with a tilted head. Then in a graceful sweep, opened its wings and flew away.