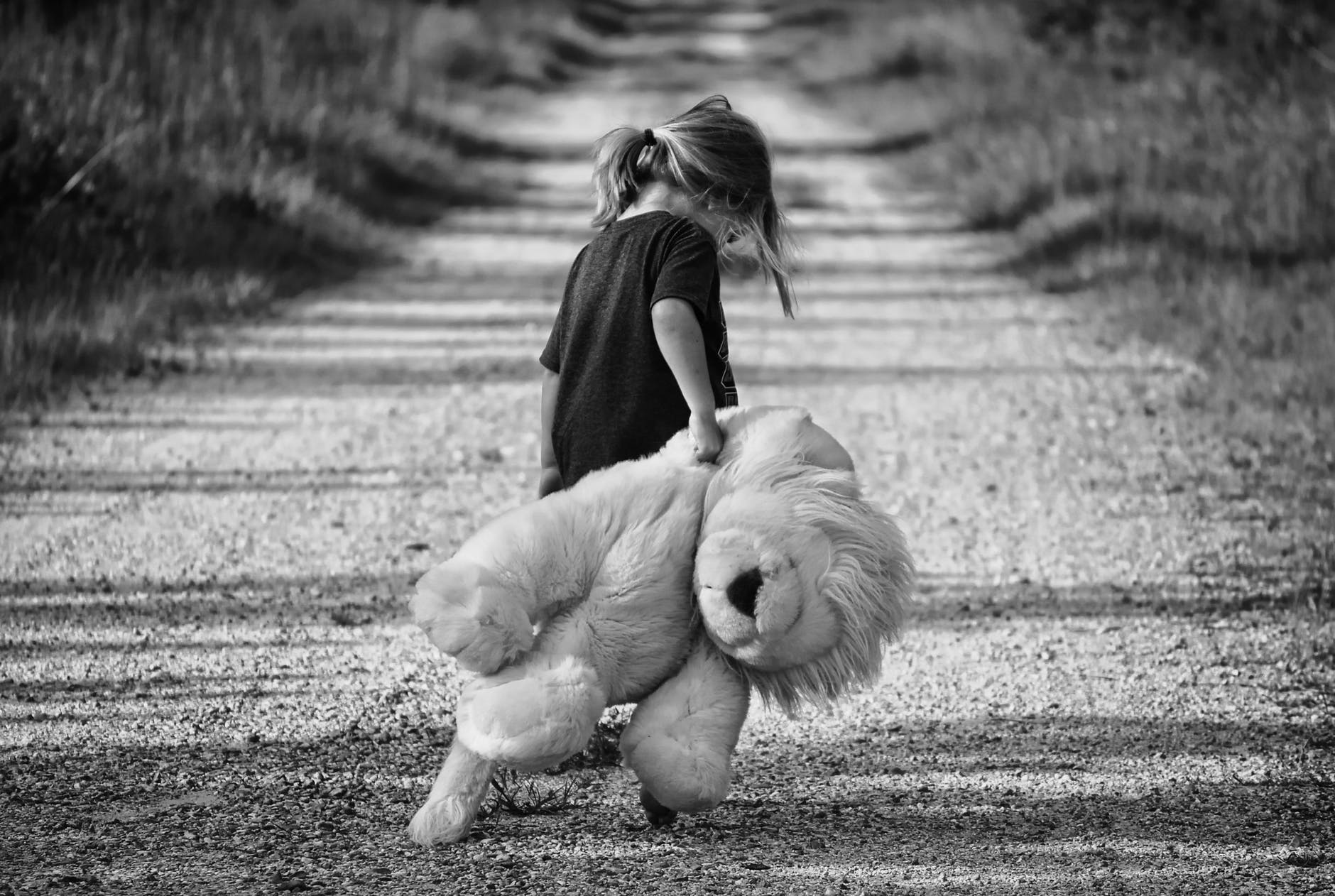 Not all the stories I write are weird, and to prove it to you, I submit for your approval “The Magic Nickel” – which is about the world from the perspective of a four year old and how magical everything seems at that age. I wrote it a couple of years ago, and it still makes me smile when I reread it – and maybe it will make you smile, too. Enjoy!

Lanie (who, by the way, thought her full name was “Elaine Janette Myers Get Yer Butt Back Over Here”) had been trying to sit quietly in front of the TV which was playing some sort of game show. She sat next to her Grandma, who smelled like fabric softener sheets and cigarette smoke. Her Mama was at work. Or at least that is where she said she was going when she left each morning, but Lanie didn’t really understand what “work” was, or why Mama went each day even though she always complained about it to Grandma.

She sat and slid her hand down between the cushions, to see if there was anything there. Sometimes she found Grandma’s glasses, or Mama’s rings and earrings. Today she found a shiny brand new nickel.

The moment her little fingers curled around it, she knew it was important. It was heavy and round, and when she brought it up and inspected it, it was shiny. She could feel it in her bones – this had to be a magic nickel.

She looked slyly over at her Grandma, but Grandma was busy saying cuss words at the stupid contestants on the TV. Lanie petted the nickel in her hand as if it were a living creature. Then ever so slowly, so as not to alert her Grandma that she had found a magical item, she slid the nickel into her shorts pocket.

At the commercial break, Lanie asked her Grandma if she could go outside to play. And her Grandma grunted her approval.

Lanie slid off the couch and headed to the front door. Her Grandma called after her “You stay off the street, though, or else!!”

“Okay” she shouted back and went out the door, careful not to slam it, because yesterday she got yelled at for slamming it even though it wasn’t her fault the wind got it before she could close it. She made a face that included sticking out her tongue at the wind, who she believed had done the door to get her into trouble, and then scampered off down the drive.

The dirt was uneven, and deeply rutted in places – the actual street was down a bit and next to the bank of mailboxes that stood at the entrance to the trailer park they lived in.  She heard the unmistakable din of other kids up to something and went towards the noise.

Three kids had cornered the stray orange cat that sometimes slinked through the dumpsters and were throwing rocks at it. Lanie got mad at them, and shouted at them to stop it or else.

The biggest kid, Cordell, jeered at her and said “Make me, if you can Plainie Lanie ” and went to pick up another rock. Lanie reached her hand into her pocket and felt for the nickel. She held it in her fist and wished Cordell and his cohorts would stop hurting the cat. She wished it with all the fervor and sincerity that a four year old could muster. She wished it from the soles of her feet and out the top of her head.

And something about her serious demeanor caused all three kids to stop what they were doing to watch Lanie, whose face was getting an angry red tinge as she focused all her anger on Cordell. Cordell started to laugh at her.

The orange cat took this opportunity to fight back, leaping on Cordell with full fury, biting and scratching while Cordell’s minions screamed and ran. Somehow in the ruckus, the cat had managed to rake a long deep cut across Cordell’s neck – and then leaping lightly off of Cordell, who was now holding his neck and crying on the ground, the cat walked over to Lanie, wove around her legs twice and then trotted off.

After the cat was gone, Lanie stood watching the injured Cordell with detached interest. Cordell’s accomplices returned with his mother.  She swatted Lanie away, and scooped up her precious bully of a son and took him off to an old Buick which sat idling noisily. They drove away with Cordell crying loudly out the open windows that the cat had killed him.

The other kids kept their distance from Lanie, convinced she had some mystical power.  Lanie smiled knowing she had the magic nickel in her pocket. After the drama, she shrugged and went home, spending the rest of the day watching TV with Grandma or playing with the two Barbie dolls that she had rescued ages ago from the trash at the trailer at the end of their lane.

That night, after Lanie’s Mama came home from work and finished complaining to Grandma, and Grandma smoked “one last cigarette” before bed, Cordell’s mom came knocking at the door. Lanie could hear them talking at the door.

“The kids said that your cat attacked my Cordell”.

“Big orange tom cat, Cordell had to have stitches and everything. Cost us a damn fortune. “

“We don’t have no cat – orange, purple or otherwise.” Grandma said, blowing smoke sideways from her mouth.

“Then you won’t care if I shoot that damn cat when I find it.”

“Suit yourself. What was your kid doing to the cat anyway? I heard tell that Cordell killed old man Nelson’s little dog. ” Mama said.

“That’s a lie, Jane Myers, a filthy lie. Everybody knows that dog just run off or something. My Cordell didn’t hurt nothing.”

“Well, we ain’t got a cat but I’m guessing that kid got what was comin’ to him.” Grandma said and spat out some of the loose tobacco that had got into her teeth from the Lucky Strike she was smoking.

Lanie went and got ready for bed and smiled to herself. She took her magic nickel and wished for the cat to be safe.  And she wished for Mama and Grandma to be happy, for a change. And then she wished that Cordell would just go away.

Next morning, after Lanie got up and dressed and made a bowl of cereal for herself she decided to watch out the window for a bit while Grandma and Mama finished getting up and dressed. Some pretty red and blue lights were flashing off of a car that was parked down the drive a ways – in front of Cordell’s house.  There were a couple of other dark cars down that way, too. Grandma came up to the window, behind Lanie and sniffed, saying “Wonder what’s up at the brat’s house?”

Pretty soon, Mama was standing at the window with Grandma and Lanie watching the pageant at Cordell’s house.  A man with a big black trash bag came out of the house, with Cordell by the hand. The bag and Cordell went into the back seat of one of the cars. Cordell’s Dad came out with his hands behind his back and two officers pushed his head down while he got into the back seat of the car with the lights.

By the time Cordell’s Mom was brought out, also with her hands behind her back – Lanie’s Mama and Grandma were chuckling.  Lanie asked what was happening, and Mama said “looks like they got arrested and Cordell is going back to foster care.”

Grandma said “It’s about time” and went off to find her pack of Lucky Strikes.

Mama told Lanie to behave herself today, because she had something called an interview she was going to, and if it went good, they might move to someplace nicer. Mama kissed Lanie on her forehead and said “Wish me luck, okay?”

Lanie said she would. And she thought about her magic nickel. She’d put it in her pants pocket this morning when she got dressed.

It dawned on her that since Cordell and his parents were gone now, the orange cat would be safe; the other kids wouldn’t mess with it without his encouragement.

And thinking about it, them being gone also seemed to make Mama and Grandma happy.

She pulled the nickel out of her pants pocket and stroked it and whispered “thank you” to it.

Lanie’s Mama got the new job, and after a few months they all moved to a nicer place. Everything was mostly good and when it wasn’t – Lanie would make a wish on her magic nickel and things would work out.

And when Lanie grew up, she had the nickel made into a pendant that she always wore, until she gave it to her own little girl. But that’s a story for another time.